In the United Kingdom (UK), for example, the first relevant standard was published in 1923. 1986 the first British standard for ground granulated blast furnace slag as a concrete addition was released. Within the current European cement standard EN 197-1, nine cements are listed which may – besides Portland cement clinker - contain slag contents between 6 % and 95 %. Finally, in 2006 the European standard EN 15167 for GGBS as a concrete addition was published.

Blast furnace slag cement or combinations of cement / GGBS have a high resistance to chemical attack, a low active content of alkalis and a low heat of hydration. Concrete made of blast furnace slag cement or higher amounts of pure GGBS has a high durability as a result of the low capillary porosity, a higher capacity to bind chloride ions and a high electrolytic resistance.

These properties favour the use of slag cements in special fields of application, e.g. for waterproof basements, dams, marine structures, bridges, telecommunication towers and containment structures.

With the substitution of Portland cement clinker by GGBS in cement or concrete, the consumption of natural raw materials as well as energy demands of cement production and specifically CO2 emissions are significantly decreased. 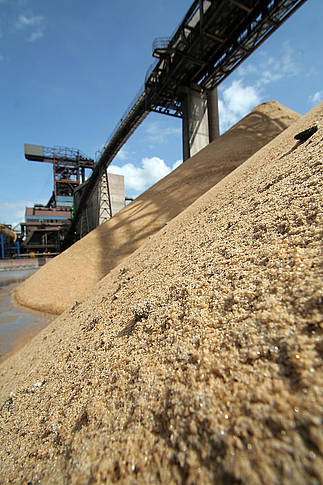